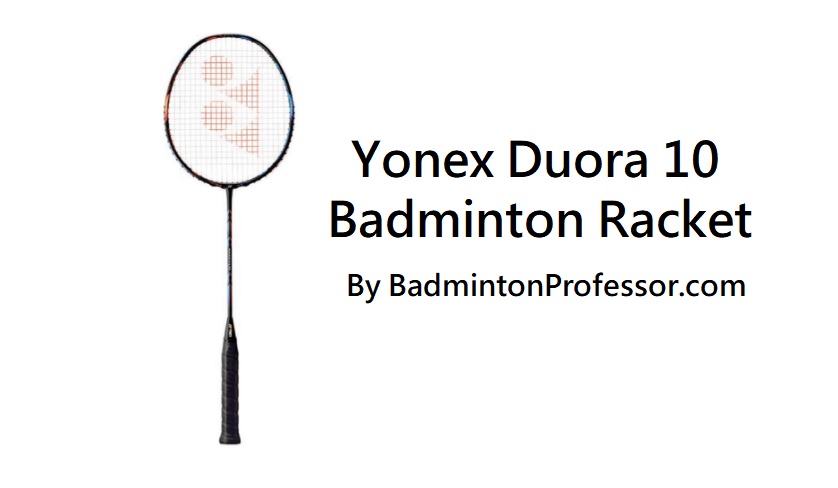 The Yonex Duora 10 is a racket used by men’s singles world champion Lee Chong Wei from Malaysia. This is a racket launched in 2015 as a new range named with number 10, breaking the traditions of Yonex would introduce a new range with 7.

Duora 10 is definitely a success! Quite a few of Super Series Tournaments winners were using this racket. I would say this is a racket you need some skills and time to master it but the result is fruitful.

The Yonex Duora 10 is the first Yonex racket that brings In the concept of 2 side racket, the frame of the head is divided into 2 sides: 1 side is a traditional box frame while the reserve side (the aero frame) comes with a sharper cutting edge.

In other words, Duora 10 should be able to provide you with 1 side fast and 1 side slow (or more stable). The faster side would be able to perform a much faster and powerful swing. In this review, we will give detailed information and comments regarding this amazing racket!

The Duora 10 is a black racket that comes with different color marks on both sides: 1 side green and the other side orange to distinguish the different sides of the frame. I do like it though!

The forehand and backhand head frame is made with different structures: Box frame and Aero Frame. According to Yonex, the box frame of the forehand side would result in a more powerful smash and longer shuttles holding time, hence results in improved stability.

The aero frame of the backhand side would results in better rebounding and faster speed, so you can expect a quicker return.

I would say the head of Duora 10 is, pretty big, bigger than the average isometric square head but smaller than Yonex ArcSaber 11, with a shorter shaft but a longer handle, which makes this racket a bit more forgiving and easier to control.

Such a big head frame would results in a problem: shorten the life of badminton strings because there is a bigger area at the tip of the frame that would have no horizontal strings.

Yes, this is a stiff racket but not a very stiff one, we felt that within the high-end Yonex rackets, the Duora 10 is more a “softer-stiff” side. Probably because this is a racket designed for players who like a more balance playing style?

Yonex Duora 10 was used by many professional players, including:

The set we used for writing this review was :

We tried with both sides, both forehand and backhand, and eventually, we did feel the difference between both sides of the frame. And the “faster backhand” side worked for forehand too!

But honestly, do not too much from the aero frame structure because I do believe this is a slower than average advanced level racket. Probably because of the heavyweight (2U, 3U) and big head frame.

Clears was sharp, clear, crisp, and effortless! Great start! Pretty similar to Yonex Voltric Z Force 2, the shuttles just goes to where I want them to go.

Drop shots were accurate and solid. There is a slight difference between the faster side and the slower side, not much but I can feel that. Both sides were was to control and nice.

Smash was a monster!! Got to say both sides are powerful and accurate. This is not surprising because of the slightly head heavy design and the overall weight. No wonder Lee Chong Wei likes to use this racket.

Of course, Duora 10 is not as powerful as the very aggressive Yonex Voltric Z Force 2, but then for jump and smash, and a lighter smash, Duora 10 has demonstrated better control and accuracy.

Yonex Doura 10 was a bit slow for drives and push in somehow. But it was ok, just not great. I do prefer the faster side for both forehand and backhand drives.

The defense of Duora 10 was pretty great – as a “not so fast” racket. Surprisingly both sides of the racket worked pretty well though, even the box side did perform some solid returns. I am happy with that.

I noticed my students who are rather weak at his backhand did improved with this racket. (he is an intermediate level player who is fit and plays around 2 times a week)

Overall, the net performance of Duora 10 was the best among all aspects. The faster side performed easily to control killer net shots, no matter it’s the forehand or backhand side. I am pretty good at backhand skills so I cant feel that so much by myself, but I noticed that I improved my students’ backhand net performance, just like his backhand defense.

I am very happy with the frontcourt performance of Yonex Duora 10.

Which string is best for Duora 10?

For intermediate to an advanced level player, Yonex BG 65 Ti with 25 – 27 lbs would be a pretty good option. I used BG 66 Ultimax strings at 27 lbs and I love it. The suggested strings for Duora 10 by Yonex were BG 80 Power and BG 66F for control players and aggressive players, ranging from 19 – 27 lbs depending on the weight of the racket and players.

The Yonex Duora 10 is a great balance racket, the overall weight and slightly head-heavy design, together with a large string bed made it an aggressive and yet forgiving racket. The defense side was quick and easy to control.

Duora 10 is a pretty heavy racket so you will need to be pretty fit and strong for mastering it. And beginners who is not that fit may hurt their wrist, do be very careful.