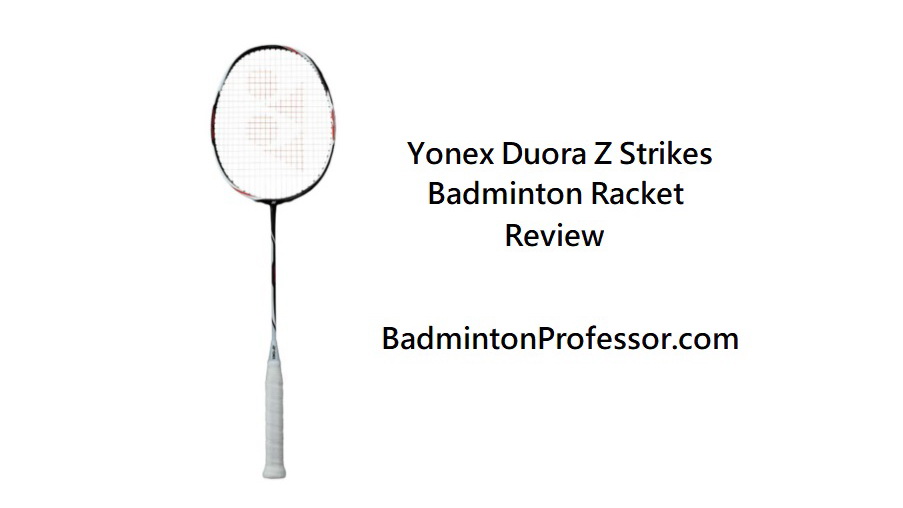 The first time I saw Yonex Duora Z Strike badminton racket was at the 2016 Super Series finals. The most famous player using this racket was Viktor Axelsen from Denmark, the 2017 Men’s Singles World Champion.

Because of the Dual Optimum System of the Duora series, the Duora rackets come with a 2-side frame (one side fast and aggressive, the other side slow but stable). I do like this racket considering it as one of the best Yonex Badminton Racket, probably this would be one of the favorite Duora series rackets!

Let’s go and take a look at the detailed review!

Who Should Use Yonex Duora Z Strike?

The Yonex Duora Z- Strike is suitable for the advanced player who is strong, skillful, and is looking for well balance racket which can smash well and offer a high level of control to the game.

The compact head would result in less air fiction, quicker swing and stronger mass, but then at the same time, the sweet spot would become smaller so you will need more accurate skill to master it.

The isometric head shape of Yonex Duora Z Strike did help a bit in providing better control and a wider sweet spot.

The Stiff T-Anchor graphite imparts exceptional strength to the joint, enabling the racket to twist less and allowing for increased accuracy.

The grip of the Yonex Duora Z Strike is slightly longer than the Voltric Z-Force II, which means you have a shorter racket shaft. I do like the longer grip because it will improve the control over the racket.

According to Yonex, the Dual Optimum System utilizes the player’s maximum power for backhand and forehand, one side should come with higher stability, and the other side supposed to be quicker and more responsive. I do like this idea and I was very happy with it but quite a bit of my students and friends do not think so.

They were a bit annoyed with the performance when they used the wrong side and told me they do prefer a racket that is more consistent. I do understand how they feel and that’s why I believe this is a racket takes time for you to get used to it, and need some good skills to master it.

According to Yonex, Duora Z Strike is made with Nanotechnology and would increase the shuttle holding time by 3%. I don’t feel much difference during the test, but it was very easy to control, so probably it helped.

Duora Z Strike is made with ultra-resilient metal, nano-metric bonding technology, material, and H.M. Graphite. To make it short, these high tech and fine materials are offering this racket extra stiffness, flexibility, and super lightweight. And hence results in more powerful shots and faster swing and more accuracy.

The Duora Z Strike has 8 linked grommets with differing thicknesses on both sides of the frame, this leads to the possibility of a stiffer string bed and hence could result in a more powerful shot.

The suggested strings from Duora Z strike range from 20 to 28 lbs. But I tried it with 30 lbs and the result was still great.

I found that there are more singles players than double players using Duora Z Strike.

And for your record, Victor Axelsen has set the fastest world record smash (419km/h) using Yonex Duora Z Strike during the 2017 All England finals when he was against Kento Momota. I’ve mentioned this in my article “Fun facts about Badminton“.

I was testing the Yonex Duora Z strike with 28 lbs BG 65 strings and a G4 grip. The performance was great, it was light and I can feel the added repulsion on the Aero frame was a real bonus during faster and snappier rallies.

Clears was superb! Clean, powerful, and accurate. I tried with both sides and didn’t feel much difference for clears. I felt a lot of control over the shuttles, it went to where I wanted it to go.

Drop shots were accurate and strong. I can feel the head and probably players will require a certain level of strength and skill to master it. I tried on both sides and the results were great. But I notice there is a side I can deliver faster shots.

I felt the sweet spot of Yonex Duora Z Strike is bigger than Z Force 2, during my test there was no mishit at all.

Duora Z Strike is supposed to be an even balanced racket but when I played with it, I can always feel the head, which added a lot of points for its smashing performance. It’s slower than the aggressive series of Yonex like Astrox 99 for sure.

Overall I do like the smash performance of Duora Z Strike, well-controlled and powerful. I tried it once with 30 lbs, very powerful smashes was generated! Just it would consume your energy a lot too.

Net performance for effective, the net shots and kills were killers! Clean and quick! Very solid and I love it. Again, there is a meaty side when I was testing the net performance.

The defense of Duora was solid and stable, no, it’s not that responsive, probably because of the weight of the racket too. It’s a bit slow compared to those super lightweights, fast rackets. But hey, it’s much quicker than Duora 10!

Players with great skills but not so strong? You may hurt your wrist as my friend did after 3 hours of using this racket. But his performance was excellent.

Blocks are pretty good but you need to be skilled, there is a lot of wrist works, drives a lot.

I would say Duora Z Strike is a killer racket, given the ability to handle and use this masterpiece. It gives a feeling of a blend of Yonex Voltric Z Force 2 and Duora 10 in a single racket.

Alternatively, Yonex Astrox 88D (in its 3U weight) made me toil more as it takes a lot of energy and strength to play shots such as drives, taps, and smashes (all very important shots in doubles), whereas Duora’s even balance and quick repulsion makes the Z Strike a better overall racket to wield in doubles.

DZS also compares well with Astrox 77, which has a medium flex shaft, as a professional player, I can safely say that the Duora Z strike is far better at putting extra power on shots. Players can easily clear the 3rd line shots with Z Strike, as Astrox 77’s weight is 83 grams while Z strike is available at 88 gms, slightly heavier but making more powerful shots possible.

I like Yonex Duora Z Strike racket, I seriously do. This is a racket that can deliver excellent results if you can master it. If you can use the Dual system well, it will boost the performance of your attack and defense.

But do note that this is a racket that takes time for you to get used to it so you can use both sides well. As I mentioned at the beginning of this article, this is a racket for an advanced player who is strong and skilled, it’s a heavy racket so you need to be physically fit for mastering it or else you may hurt your shoulder and wrist.

Duora Z Strike is not a beginner-friendly racket like Yonex Arcsaber 11, probably intermediate players who are strong enough and willing to spend some time getting used to the Duora Z Strike would love it a lot too. Just be patient, and try it out with different strings setting.

With a good level of skills you can make well use of all the details offered by this racket and boost up your performance, I hope you enjoy this review and have a good game!