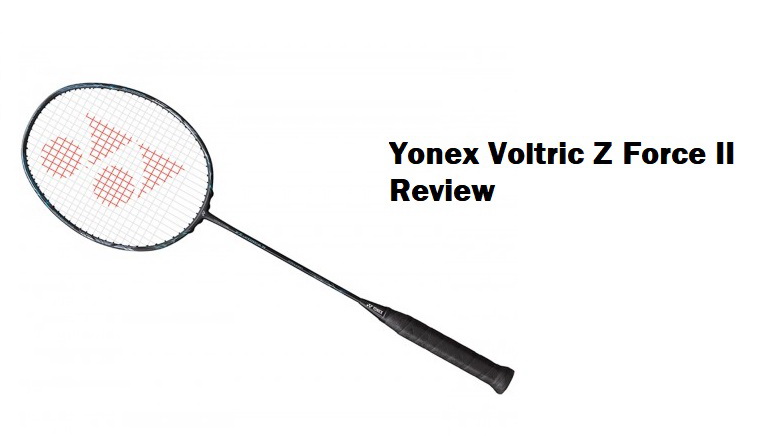 According to Yonex, the Yonex Voltric Z Force II is an badminton racket designed for “advanced players with enhanced skills”.

You can still find the characteristics of the Voltric Series racket with a steady grip and extraordinary strength in the Voltric Z Force II.

This heavy-headed racket is intended for advanced players who want a solid smash. The head of the Yonex Voltric Z Force II also has a smaller size, making swinging easier and faster. The advantage of this racket lies in its excellent handling. You can feel the racket joining your hand.

What I Like about Yonex Voltric Z Force II Badminton Racket:

Yonex Voltric Z Force II has a lot of good reviews, this racket was used by many professional and famous players, such as:

A heavy racket will be more difficult to control. Therefore, if you want to focus on ease of control and maximizing maneuverability, choose a racket with a lighter weight. Rackets with lightweight can be operated well.

We would recommend a racket with a weight of 4U or 5U for those who want agility in playing. If you feel that the lightweight racket is not powerful, choose the head-heavy balance type.

Voltric Z Force II comes with two weight options: 3U (88g) and 4U (83g), which makes it a lot easier for players to choose the most suitable rackets. I was using the 4U VZF2 and very happy with the performance in front of the net. It’s lightweight and very maneuverable.

What we like is Voltric Z Force II can make your swing faster and smoother with a head heavy and super stiff racket. Besides, the extra slim shaft keeps your arms from getting tired easily when swinging the racket.

The second is flexibility. The degree of racket flexibility is determined by the stiffness of the shaft. Both flexible and rigid rackets have different functions.

A flexible racket has a good bounce during the smash. Meanwhile, a racket with a stiff bar helps you in making quick attacks.

Voltric Z Force II has extra stiff flexibility so it can support your smash and drive more powerfully.

A slightly stiffer grip is a good choice for intermediate level players. But, if you are an advanced or professional player, we recommended you to choose a racket with a high degree of stiffness. It will help you to deliver powerful punches during the match.

Voltric Z Force II has superb handling that can give comfort when playing badminton.

If you are interested in getting more information regarding how to pick the best badminton racket, please check out our articles regarding beginner and intermediate rackets.

Yonex Voltric Z Force II is supported by the Tri-Voltage System technology that can assist you in smashing. The rigid structure makes the racket help you to gain more control and holds the shuttlecock longer. Also, you can easily swing and provide energy to push the punch stronger.

One of the coolest features in Yonex Voltric Z Force II is the sound filter. This feature functions to eliminate 31 percent vibrations to produce a good hitting sound when hitting the shuttlecock. You can focus more on the match. On the other hand, you can also give your opponent pressure with a solid hitting sound.

The ultra-slim Yonex Voltric Z Force II racket handle is one of the thinnest and strongest made by Yonex. With Yonex Nanometric carbon material, Voltric Z Force II comes with a thin and strong “ultra-slim handle” that assists you in producing powerful and intense hits.
But you have to be more careful when playing fast because the controls that this racket has are very challenging when playing at high intensity.

The Yonex Voltric Z Force II also features a single-pass grommet hole construction which provides more grommet holes for higher-performance alignment patterns. With more grommets holes, you can feel that your smash becomes more powerful.
The shuttlecock will be well-aimed even with a weak shot. Also, the sweet spot will widen with just the right amount of pull. That way, you won’t miss a shot.

I found this racket offering a pretty fun and big sweet spot, compared with Yonex Voltric Z Force, there was no solid feeling from the stringbed but the results were pretty good, well-controlled, accurate, easy, and powerful.

Compared with Voltric Z Force, Voltric Z Force 2 has improved a lot in terms of maneuverability, which makes it so much easier and quicker to return the shuttle. Probably thanks to the new aerodynamics.
There is still a lot of stress applied on the wrist and forearms so do make sure you are fit enough to master it.

Net play performance was excellent, probably because of the close to the center sweet spot and the speed. However, it does take a high level of skills and accuracy to master it.

Although Yonex Voltric Z Force 2 racket is a head heavy racket but probably because of the improvement in aerodynamics, it feels as maneuverable as rackets that are around 2 – 3 gs lighter than it.

Yonex Voltix Glanz can be a good alternative for you at beginners or intermediate levels. With a 4U G4,5,6 weight grip size and an ergonomic and sporty design, this racket is ideal for a combination playing style either defensive or offensive.
However, this racket is not suitable for high power players who like long rallies.

If you expect a racket that can be used for singles and doubles as well, Duora Z Strike is the best one. The box design gives more strength, especially when doing a forehand smash. With a weight grip size of 3U G4,5, this racket is very aerodynamic for the backhand drive.

This racket is suitable for advanced players who need more power for attacking from the backcourt. With the rotational generator system in this racket, weight distributed the grip end, frame top, and the joint for maximum control.

Overall, the Yonex Voltric Z Force II is the answer for those who have longed for a racket with the right combination of weight, extraordinary handling, and steady smash power. With 3U and 4U (average 83 – 88 g), G4,5 weight size grip, you can improve the fast and smooth swing.

Besides that, the use of advanced Nanometric carbon technology to produce a very thin, very tough aerodynamic shaft, which is created to produce a more powerful and intense smash.

I would consider the Yonex Voltric Z Force II as one of the finely made Yonex Badminton Racket, for sure, we do highly recommend this racket to our readers!